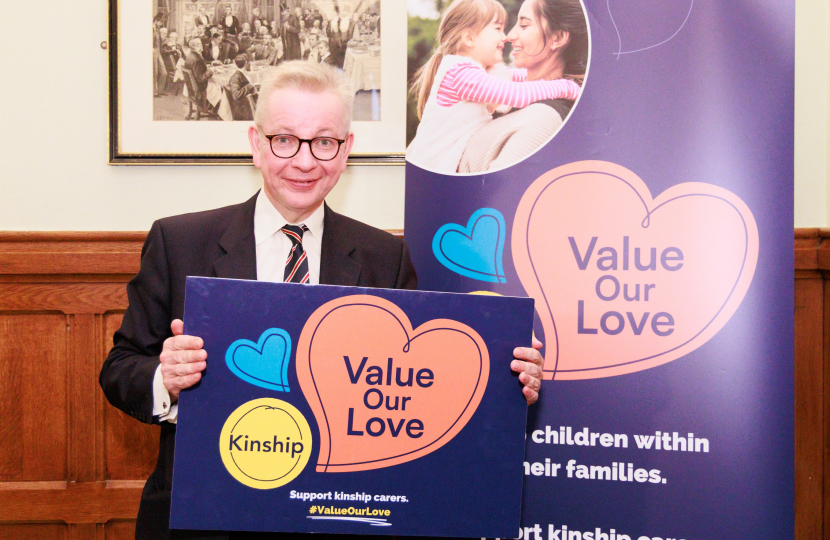 Kinship care is where a family relative or close friend steps up to care for a child when their parents aren’t able to. Kinship carers, including grandparents, aunties, uncles, cousins and other family members and friends, are raising more than 162,000 children in England and Wales – more than double the number in foster care. Data released by national charity Kinship as part of the campaign estimates that there are 215 children in kinship care living in Surrey Heath.

A new report released by Kinship alongside the campaign – The Cost of Loving – reveals that 8 in 10 kinship carers are failing to receive the crucial support they need, leaving many in crisis. Most worryingly, over a third (36%) of those not getting the support they need feel they may be unable to continue to care for their children due to the lack of support and the rising cost of living. This would have devastating consequences for children as well as for the public purse.

Many kinship families seek help from the charity, with most reporting that they receive no financial or practical support. They also report that they struggle to access support for their children growing up in kinship care, who often don’t get the help they need with their health or in school.

Kinship’s new #ValueOurLove campaign calls on politicians to act now and equalise support between kinship families and foster and adoptive families, so that more children can grow up in safe and loving homes within their family network.

Yesterday, (19 October), Michael Gove MP attended a reception held in the House of Commons to mark the launch of the campaign is also urging members of the public to support the campaign by signing Kinship’s petition at ValueOurLove.Kinship.org.uk.

“I am proud to support kinship carers in Surrey Heath and the incredible impact they have in stepping up to raise children they love.

“It is so important that we ensure these families are given the best possible support and that we value the love they give – we know it makes an enormous difference to the lives of their children, to communities and to society by keeping children out of the care system.

I’m supporting Kinship’s #ValueOurLove campaign and will be working hard in Surrey Heath and in Westminster to press for the financial, practical and emotional support that these families deserve. I would urge local people to throw their weight behind the campaign by signing up at ValueOurLove.Kinship.org.uk.”

“Kinship’s #ValueOurLove campaign is urging the government to give kinship carers the financial and emotional support they need and deserve. They make huge sacrifices to care for children - spending life savings, giving up jobs and moving homes – but they have been ignored and left without support because they are family.

“Unlike foster carers, being a kinship carer is not a choice, it is done through love and often in times of crisis. Kinship carers must be treated fairly because raising a child costs money. We’re delighted to have the support of MPs such as Michael Gove MP who can help us campaign for the changes kinship families in Surrey Heath and across the country so desperately need.”