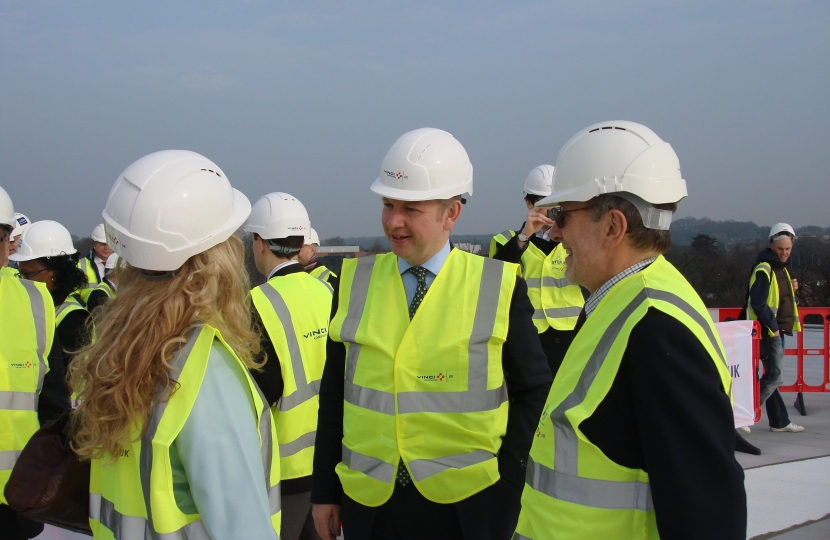 Hospital chiefs and contractors took to the top of a new helicopter landing pad to mark a major milestone in the building of a £22m emergency department and day surgery.

The ‘topping out’ ceremony on the roof of the new extension at Frimley Park Hospital on Friday 2 March marked the finish of the highest part of the building. It means the project to provide the community with one of the best emergency departments and day theatre units in the country is nearing completion.

Topping out is an opportunity for the hospital trust to thank the builders and others contractors for their work. It takes place on the completion of the highest part of the building, in this case the new helipad that will allow the hospital to receive and transfer some of the sickest patients in the safest possible way.

Andrew Morris explained how emergency services have changed since he first took over at Frimley Park in the late 1980s when there were just 25,000 emergency patients per year and one consultant doctor in the department. He said: “It’s very different now, with about 100,000 patients every year. We’ve got 13 consultants here for you in the emergency department from 8am to midnight seven days a week.”

He thanked everyone involved in the project, which he described as the most ambitious yet for the trust.

“Being a foundation trust has meant we can get on and do it without having to get approval from somewhere else.

“I’m really pleased with what we’ve done so far. It will be a real benefit for the hospital and most importantly for the 400,000 people who rely on Frimley Park for an excellent service.”

Adam Wells said that topping out ceremonies usually happen sooner during a construction. But with the helipad as the highest point, most of the structure is already finished.

“When I first saw the plans I can’t repeat exactly what I said, but it was words to the effect of, ‘wow, that’s ambitious!’ Not so much because of what we’re building as doing it in this environment while normal business continues. Then I thought, we’ve got the expertise to build this.

“I’m also very pleased that we’ve got this far to 46 weeks without a single reportable accident, even though we’ve had excellent facilities on hand should anything have happened!”

He thanked the Frimley Park team and others involved in the project and added: “We have had some challenges along the way but the teamwork between us has enabled us to get where we are now. If we can carry that forward I know this will be a very successful project.”

Michael Gove, MP for Surrey Heath which includes Frimley Park, said: “I already know what it’s like to be here when something is delivered in this hospital because my son was born here.

“This hospital has moved from being a good hospital to perhaps the best in the whole of the UK. It has grown as a foundation trust and has a quality that is peerless.”

Construction work is due to be finished in mid June, with the emergency department scheduled to open soon after.

The hospital is already designated as the regional heart attack centre for Surrey, east Berkshire and north east Hampshire, providing the best possible treatment round the clock to patients suffering from the most dangerous kinds of heart attacks. The centre is included in the new £3.3m cardiology wing which is also nearing completion.

The current emergency department was designed for about 75,000 patients per year but increasing numbers due to a bigger population and growing catchment has taken this to more than 100,000.

The new department will include eight resuscitation beds and there will be separate rooms for all patients in the majors section. Patients will be triaged at the door and the most senior doctors in emergency medicine will be on hand to make key decisions about patient care.

The two extra day surgery theatres will allow more operations to be carried using surgical advances that are less invasive for patients, usually resulting in faster recovery and better outcomes.

Frimley Park Hospital was recently officially designated as a trauma unit following an assessment by the South of England Strategic Health Authority.

Assessors agreed that Frimley Park is an ideal place to site a helipad because it is equidistant from major trauma centres at Southampton, Oxford and South London.