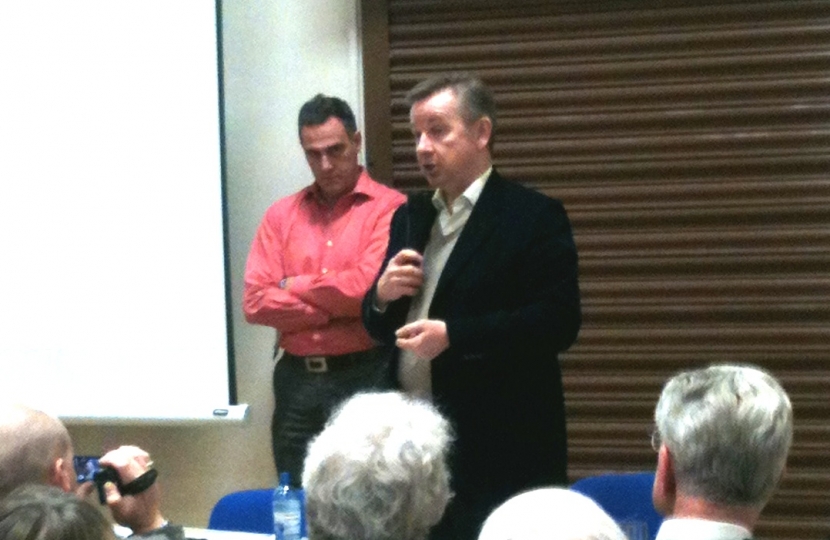 Last Friday, Michael Gove MP attended the public meeting at Deepcut Village Centre to listen to residents’ concerns regarding the proposed redevelopment of the Princess Royal Barracks. Hundreds of concerned residents turned out to express their concerns to Michael and other members of the panel, which included Chas Bradfield, Deputy Chief Executive of Surrey Heath Borough Council and John Taylor, Estates Surveyor of the Defence Infrastructure Organisation.

“Right from the beginning, I have been struck that people could have opposed this redevelopment altogether, but that hasn’t been the position of the community. Residents are willing to work with the planners and the Council. Residents recognise that the idea of sensitively planned and appropriately developed additional housing is a good thing but the balance has to be got right. On that basis I have been trying to, as their representative, put concerns across. I also want to thank the Deepcut Liaison Group for all their hard work and for organising this meeting”

Michael will be meeting the Deepcut Liaison Group, the DIO, GVA/AMEC, Surrey Heath Borough Council, Surrey County Council, and Natural England, to ensure that residents concerns are given full consideration.

If you have any issues you would like to raise about the proposed redevelopment, please email Michael at michael.gove.mp@parliament.uk, and he will bring them forward at his meeting.