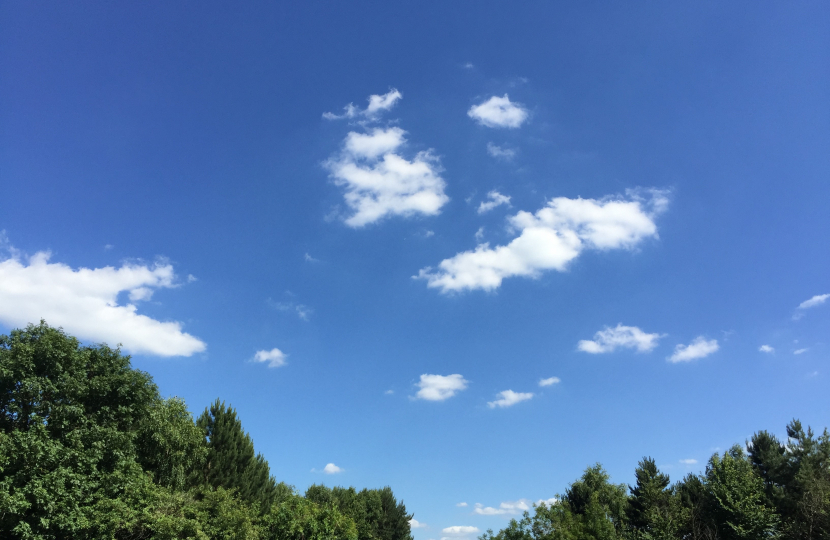 Michael has been contacted by many constituents who are very concerned about the rollout of internet services by toob as it is proposing to use telegraph poles where no underground utilities are available.

Understandably, this has raised great alarm amongst home owners that their properties are going to be blighted by unsightly poles and feel that this is taking us back to a bygone era as now it is expected that all such utilities are placed underground.

Michael has raised constituents’ concerns with toob, and on 22 June a constituent very kindly informed him that they had received a leaflet informing them of a meeting that was due to be held the following evening by toob.

Unfortunately, due to the late notice and exisiting diary commitment, Michael was unable to attend the meeting personally, but was able to send a member of his team to attend on his behalf. He was pleased that Heatherside and Parkside County Councillor, Edward Hawkins, was also able to be there.

At the meeting, residents were able to voice their objections very loudly and clearly.  The CEO of toob, Nick Parbutt, agreed to suspend operations across Frimley to allow a full review, which would take up to three months. Below is the update email Michael received on 1 July from Business Manager, Gavin Pidduck.

‘Further to my email of 17 June below,  I wish to provide you with an update on our discussions with residents in your constituency regarding our full-fibre network deployment.

As you may recall from my previous message toob is deploying a new full-fibre broadband network across towns and cities in the South of England with the goal of reaching 1 million premises over the coming 5 years.  As the Government recognises this technology is essential to ensure the UK can thrive in an increasingly digital world and we are delighted to be playing our role.

To date we have covered approximately half of Camberley and Frimley and over the last few months we have connected hundreds of customers who are now enjoying 900Mbps upload and download speeds in comparison with the average of 95Mbps download and 22Mbps upload for the area.   At only £25 per month many are saving money as well.

toob’s initial network designs for some areas of Frimley included the deployment of new poles to a number of roads where currently there are no new poles.   As toob started the notification process it became evident that there was a great deal of concern from residents to this method of deployment.

As a consequence of the meeting we have decided put the network deployment on hold for the Parkside area and to review the network design of the area, taking the residents feedback into account, and will re-engage with the residents once this work is complete.   We have also taken a similar approach for a number of other roads in the area outside the Parkside area where there has been strong feedback against the deployment of new telegraph poles.

Furthermore, toob has placed on hold all new pole deployments in roads that currently do not have poles across Frimley.   This provides us with the opportunity to engage other residents in the area on our network plans and to allow them to raise any concerns they may have.   Depending on the feedback from these discussions we will then determine the appropriate course of action taking this feedback into account.   We are currently working with the Heatherside Ward Residents Association to arrange these meetings.

During this period we will continue to deploy our network in other areas of Camberley and Frimley where there is existing BT poles and ducts that we can re-use.

toob has been established to provide an improved broadband experience fit for the 21st century to the communities in which we operate, it is not in our interest to alienate a community by the means in which we deploy the network.

I will write again once the consultation with the residents has been completed, communicating the next steps we will take.  However, I wanted to assure you that toob is engaging with the local community and taking their feedback on board.

There was concern that some of the roads that toob agreed to review at the meeting have been omitted from the response above and on 18 July, Michael wrote to toob to ask for a comprehensive list of the roads that are under review.

Michael received the following response from Gavin Pidduck, toob’s Business Development Manager, together with a copy of the letter toob has sent to residents, which is attached below.

In response to your email of 18 July, I am confirming we have put on hold our new telegraph poles deployments in Langley Drive and Clarewood Drive to support our brand new full-fibre broadband deployment across Frimley and Camberley.  When we deploy the network, we use as much existing infrastructure as possible, primarily BTs ducts and poles.   Where this does not exist, we must deploy our own infrastructure, and in some cases, involves the deployment of new poles.   I have attached the letter that we have sent to the residents of Langley Drive and Clarewood Drive for reference.  This letter also went to the residents of Tekels Way, Fern Close and Hambleton Close.    We are reviewing the network design in these roads and will re-engage with the residents ahead of any future deployment of the network.   The review of the design will assess the viability of an underground deployment in these roads.   For clarity we will not be deploying new telegraph poles in these roads.

In addition, we have also written a separate letter to the residents of roads in Parkside where no poles currently exist and we intended to deploy new poles.   As with Clarewood Drive and Langley Drive we are reviewing the network design for this area.

Finally, last week we held a meeting in association with the Heatherside Ward Residents Association to engage with residents.  At this meeting we also confirmed that we would follow a similar approach for roads in Heatherside where we had notified our intent to deploy a new pole and where there are no existing poles.   The residents of these roads will receive a letter confirming this decision in the coming days.   These roads are.

The full list of roads is everywhere that toob had placed a notice with an intent to deploy a new pole where there are no existing poles today.

toob will continue to deploy its network across Frimley in areas where there is existing BT infrastructure that can be re-used whilst this review of the design is taking place.

I do hope this clarifies the situation and reassures residents that we have listened to their feedback and are taking this into account in our review.

If I can assist further or clarify any point, please contact me.

Michael will continue to keep in touch with toob on behalf of everyone who has contacted him and will post any further updates here and on his Facebook page.