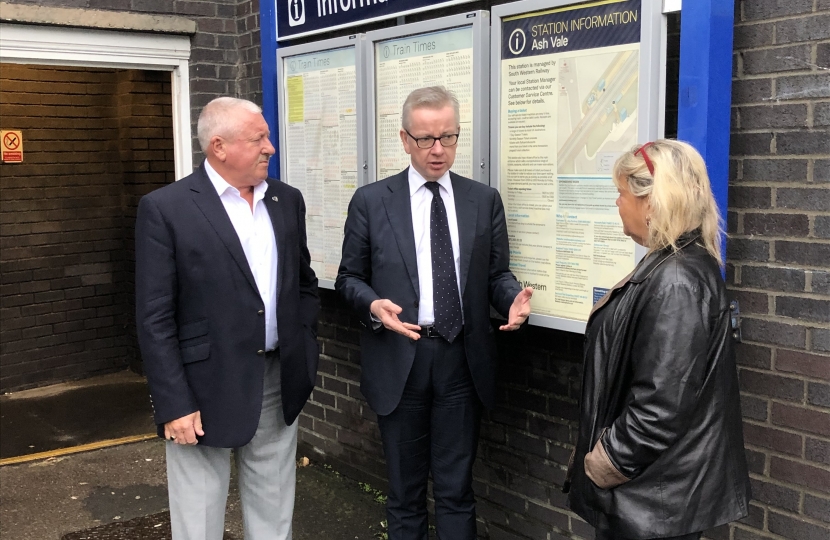 Michael Gove is continuing to press for step-free access to be installed at Ash Vale Station, as the current access at the station is difficult for less-able people, such as the elderly, and completely impossible for those in a wheelchair. It is also problematic for parents with small children and pushchairs to manage several flights of steep stairs.

In November 2018, Michael supported South Western Railway’s nomination of Ash Vale station for the Access for All programme, which provides funding to improve accessibility at railway stations.

Regrettably, Michael was informed on 5 April 2019 that the funding bid for Ash Vale was unsuccessful. He wrote again on 18 April to the Transport Secretary to ask him to provide details of any other sources of funding.

Following the Transport Secretary’s reply (see attached below), Michael wrote to Network Rail to nominate Ash Vale station for the Access for All Mid-Tier Programme, and to also ask whether accessibility improvements can be made during any other planned project works.

In February 2020, Michael met the Chief Executive of Network Rail, Andrew Haines, and once again raised the need for step-free access at Ash Vale.

In June, Michael wrote to Chief Executive of Network Rail, Andrew Haines, the Secretary of State for Transport, Rt Hon Grant Shapps MP, and to the Chair of Enterprise M3, Dave Axam, regarding opportunities to fund step-free access at Ash Vale. Attached below are the latest responses from Mr Haines and Mr Axam.

Michael has also approached both Guildford Borough Council and Surrey County Council concerning the possibility of third party funding for this project, and in June 2021 he met once more with Andrew Haines to enquire about what progress has been made. Mr Haines promised to update Michael surrounding any progress made securing funding, and following news that Network Rail was awaiting approval from the Department for Transport, he wrote to the Department to follow up on 16 November. He has since received the below response from the Transport Secretary and hopes to have some positive news soon once the Department publishes its RNEP update.