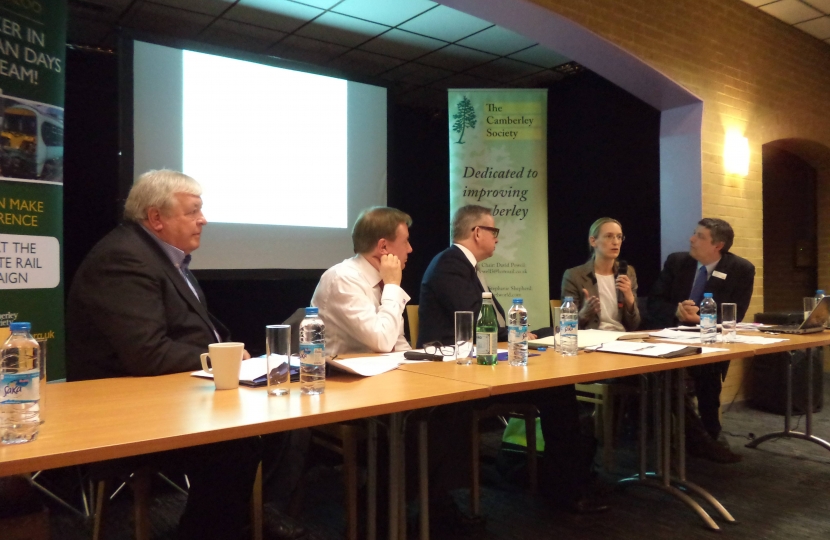 Michael wholeheartedly supports the fight for a greatly improved rail service, and is working together with local Councillors to ensure residents’ voices are heard.

On 6 December 2017, Michael met Andy Mellors, Chief Executive of South Western Railway (SWR), together with Cllr Charlotte Morley and Cllr Mike Goodman. They discussed SWR’s new timetable proposals, and expressed to Mr Mellors the concerns that constituents raised, such as the cessation of direct services to and from London Waterloo.

Michael then wrote to Mr Mellors on 14 December 2017 to outline the pertinent points that many constituents have made to him. Mr Mellors' reply is attached below.

Michael also wrote to the Rail Minister to ask him to do everything possible to help SWR preserve the vital direct connection to and from London Waterloo for his constituents and local businesses. The Rail Minister's reply is attached below.

In April 2019, following the Consultation, SWR reported that it decided to retain the direct peak services between Waterloo and Camberley, and would add an extra evening peak return service.

The new timetable was due to be introduced in December 2018, but was delayed until May 2019. Disappointingly, the proposed faster journey times were not implemented that May, and the existing timetable was largely rolled over.

On 20 September 2019, Michael met Surrey County Council to discuss securing improvements to the rail service, and wrote again to the Transport Secretary and to Network Rail. Attached below is the response of 24 October 2019 from Network Rail, which explains why the improvements proposed by SWR have not yet materialised.

Below is a timeline of the recent action Michael has been taking:

January 2020 - Michael met the new Managing Director of SWR, Mark Hopwood, to discuss rail services in Surrey Heath and Mr Hopwood provide an update which is attached below.

June 2020 - Michael wrote again to Andrew Haines, and to the Secretary of State for Transport, Rt Hon Grant Shapps MP, to ask for further information on potential opportunities to improve the rail service from Surrey Heath. He received a reply from Andrew Haines on 25 June, and a copy is attached below.

December 2020 - Michael wrote again to Andrew Haines to enquire about the progress of the feasibility study exploring the possibility of a Frimley to Alton Chord, which would potentially greatly improve journey times for many residents. Andrew Haines responded that utilising this chord would disproportionally impact wider journey times to Waterloo and that this was not, therefore, an option they could pursue. Andrew Haines did, however, explain that Network Rail will be seeking to identify changes through timetable interventions and additional services for onward journeys that could further reduce journey times for Surrey Heath residents.

April 2021 – Michael wrote to the Transport Secretary regarding an application to the Restoring your Railway Ideas Fund which included proposals to significantly reduce journey times for constituents travelling from Camberley to Bracknell, Reading, and Guildford. Unfortunately, the Minister of State for Transport responded in October 2021, explaining that the proposals were not considered suitable.

September 2021 - Michael met representatives from South Western Railway and County Councillor Trefor Hogg to discuss the December 2022 timetable consultation. Michael explained that many constituents are eager for an improved train service locally, and he was pleased that SWR listened attentively to the concerns he and Cllr Hogg raised on behalf of local residents. Final timetables are expected to be published in September 2022.

February 2022 – Michael wrote to Network Rail to request a further meeting to discuss improvements for Surrey Heath rail services. He also wrote again to South Western Railway to underline his wish for improved journey times to be implemented in the December 2022 timetable.

Fantastic news that South Western Railway (SWR) has announced that it now plans to maintain the direct services from Frimley, Camberley and Bagshot to and from Waterloo at peak times!

Michael Gove today spoke to representatives from First Group, the train company taking over the South Western Rail Franchise, to ensure changes were put in place to improve services for Surrey Heath residents.