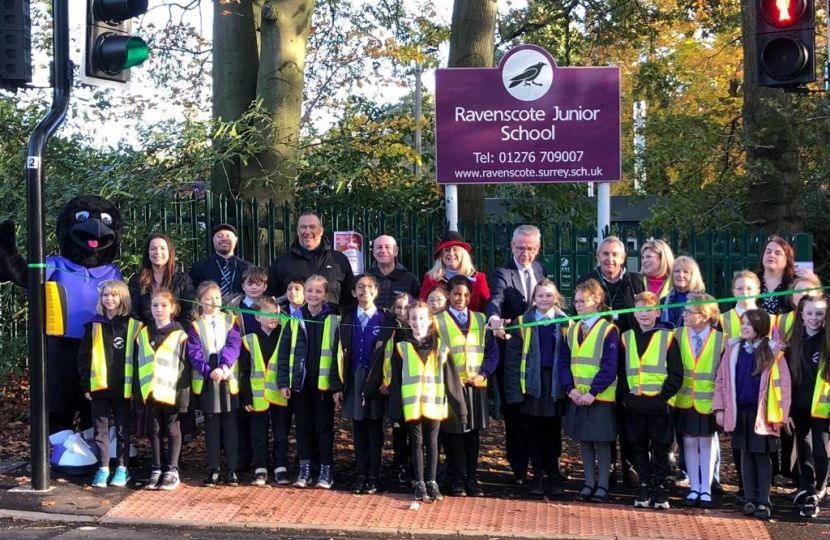 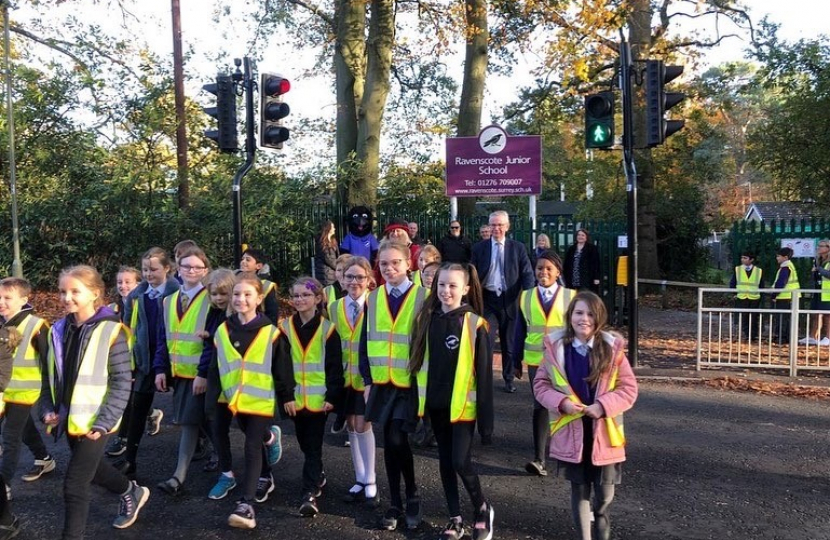 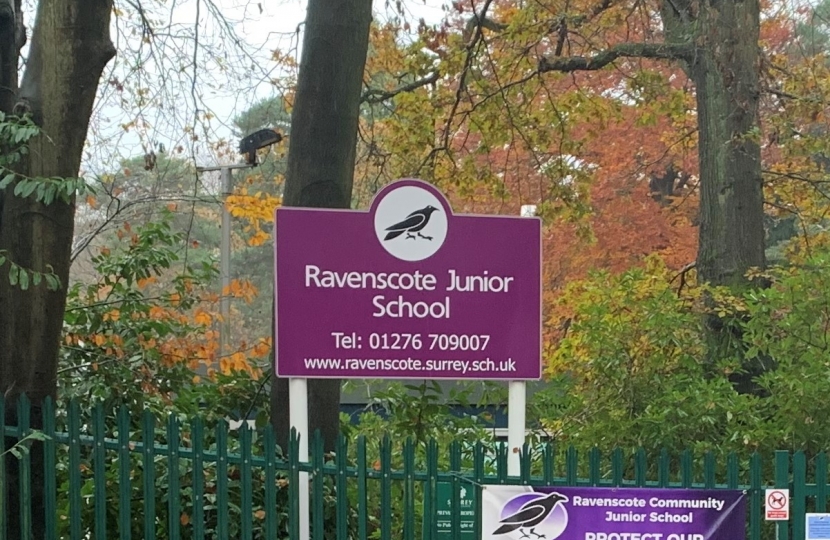 Surrey County Council recognised the need for a safe crossing at Ravenscote Junior School but, due to budget constraints, it was limited to installing a Road Table.

Attempts to recruit a crossing patrol officer to help children cross the Upper Chobham Road safely were unfortunately fruitless, and despite the Road Table installation, there were continuing reports of numerous near misses of children.

The issue remained a cause of significant concern for parents, and Michael agreed that the introduction of a Pelican Crossing would allay their understandable fears.

Michael appealed to Surrey County Council and to the Department for Transport for additional funding for a safe crossing, and below is a timeline of the action Michael has been taking:

March 2019 – Michael met local County Councillor, Edward Hawkins, together with Ravenscote’s Headteacher, the Chair of Governors and a concerned parent to discuss the issue of road safety outside the school. They discussed finding funding for a safe crossing on Upper Chobham Road, and to work to try to secure financial contributions.

April 2019 - Michael wrote to the Transport Secretary to ask about possible schemes or grants available which Surrey County Council could utilise. He also wrote to SC Johnson and to the Frimley Fuel Allotments to ask regarding the possibility of a grant towards the installation of a safe crossing.

November 2019 - Michael joined local councillors Edward and Josephine Hawkins outside Ravenscote to discuss the campaign for a safe crossing for the school’s pupils.

January 2020 – Michael wrote to Cllr Tim Oliver to ask for an update on any progress concerning a pelican crossing.

May 2020 - Michael wrote again to Cllr Tim Oliver to once again raise parents’ concerns and to ask for an update on any progress on the situation, particularly with the parent volunteers, as the School had still not been able to recruit a Crossing Patrol Officer. Michael received a response from Cllr Matt Furniss, Cabinet Member for Transport & Infrastructure, on 8 June 2020, which is attached below.

May 2021 – Michael requested an update on the situation from Cllr Edward Hawkins, and he assured Michael that he was continuing to do all he could to secure the further required upgrades to the Road Table.

June 2021 - Michael was very concerned to learn of the accident outside Ravenscote which involved a Year 7 pupil from Tomlinscote School being hit by a car and having to be airlifted to hospital. He wrote to Surrey’s Police and Crime Commissioner, Lisa Townsend, and to Surrey County Council’s Cabinet Member for Transport & Infrastructure, Cllr Matt Furniss, regarding a road safety assessment. Michael also wrote to the Transport Secretary, the Rt. Hon. Grant Shapps MP, to raise traffic safety outside schools nationally and to request a meeting to discuss this issue in full. The Transport Secretary’s response is attached below.

February 2022 – Following Cllr Edward Hawkins’ helpful updates in October, November and December 2021 about the work being done to secure a safe crossing, Michael wrote to Cllr Hawkins to thank him, and expressed his support and happiness that progress was being made. On 24 February 2022, the Local Area Committee met and voted to upgrade the Road Table to a signalled crossing, confirming that funding for a safe crossing at Ravenscote has now been made available.

November 2022 - The construction of the new signalled crossing has been completed and Michael attended its official opening on 25 November. He had the honour of cutting the ribbon, and expressed his gratitude to local County Councillor, Edward Hawkins, and to local campaigner, Louise Grainger, for their brilliant campaigning, and also to Surrey County Council for providing the much-needed funding.