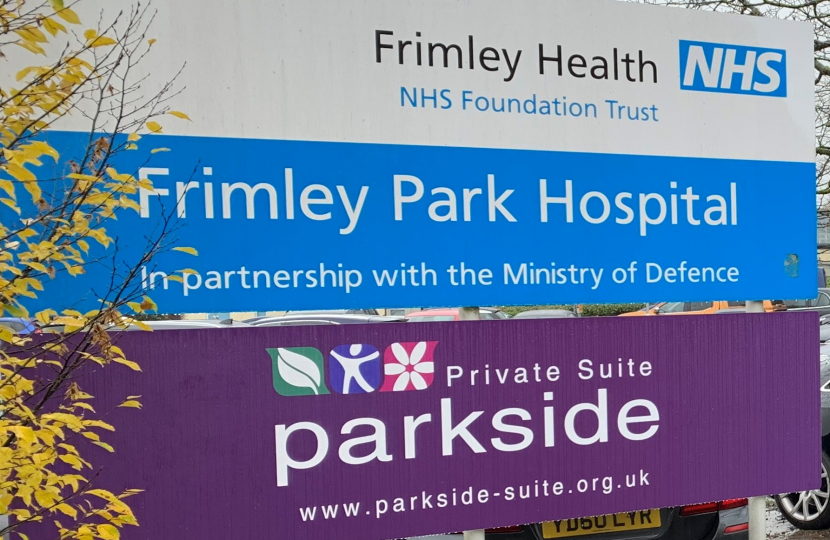 In July 2022, Michael had a catch-up with the Chief Executive of Frimley Park Hospital, Neil Dardis, and discussed the issue of A&E services at Frimley Park. Mr Dardis explained that there has been a significant recent surge in demand, and this combined with staff sickness has led to there being a lot of pressure on the Hospital’s A&E Department.

More broadly, NHS England and Improvement has recently announced steps to help the NHS prepare for Winter, by increasing hospital bed space and increasing the number of NHS 111 and 999 call handlers.

In particular, the NHS will increase the equivalent of 7,000 beds, which will include new hospital beds and virtual wards where patients will be treated at home with NHS equipment or assistance. To reduce waiting times for urgent and emergency calls, 4,800 and 2,500 extra call handlers will be recruited for NHS 111 and 999 services respectively.

Over the same period, the NHS is also seeking to reduce ambulance response times for emergency incidents, such as stroke and severe burns.

The Urgent and Emergency Care Recovery Unit is also coordinating support for the most challenged systems, including £478 million for the enhanced patient discharge programme, which will help increase bed capacity and reduce crowding in A&E departments.

In July 2020, Michael visited Frimley Park Hospital and had a meeting with the Chief Executive, Neil Dardis, who raised the issue of the Hospital’s need for substantial infrastructural improvements to its buildings, many of which were built in the 1970s. Following this meeting and further correspondence, Michael wrote to the Health Secretary to explain the serious issues the Hospital is facing with its infrastructure, and asked if it can receive the emergency funding it needs through the Government’s Health Infrastructure Plan. The Health Secretary responded on 2 February, and a copy of the reply is attached below.

In late 2021, Michael held a further meeting with Mr Dardis who explained that Frimley Park Hospital was built using reinforced autoclaved aerated concrete (RAAC), and such buildings now require extensive work to keep them safe and in use. Hospitals have to eliminate any RAAC from buildings by 2035, and around 65% of Frimley Park Hospital’s buildings contain damaged RAAC. The Hospital submitted an Expression of Interest to the Department of Health and Social Care’s New Hospital Programme, requesting £1.26 billion of funding for a new Frimley Park Hospital.

In January 2022 Michael wrote again to the Department for Health and Social Care in support of the Hospital’s Expression of Interest. The Health Secretary responded on 28 February 2022 outlining the support for Frimley Park Hospital. A copy of the reply is attached below.

In July 2022, Michael had a virtual meeting with Mr Dardis who explained that following external quantity surveying assessments, a report was to be submitted to the Department for Health and Social Care to suggest that it was likely the elimination of RAAC works would in fact have to be completed by 2030. In light of this new information, and given the Hospital was still awaiting an outcome for its bid to join the New Hospital Programme, Michael wrote once more to the Health Secretary to reinforce the need for this funding as soon as possible.