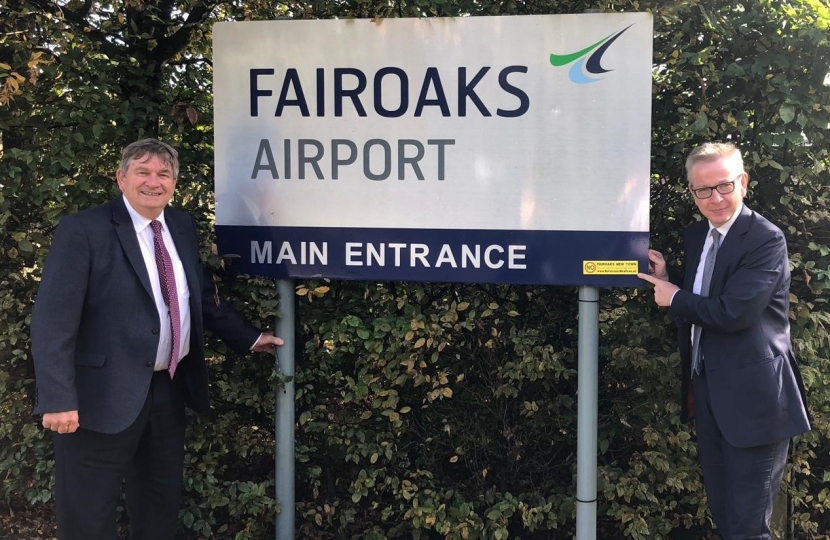 Proposals were put forward to develop Fairoaks Airport into a Garden Village of 1,500 homes. Local residents fear the impact it would have on the neighbouring village of Chobham, which already suffers from congested traffic.

‘I do not personally support any of the plans for development so far put forward, and I do not support them for environmental, infrastructure and congestion reasons and, most of all, because of the clear view of Chobham residents. My preference would be for the airport site to continue in its current form.’

On Saturday 27 January 2018, Michael attended the Fairoaks 2020 Community event, when the Chairman, Douglas Mancini, presented an alternative scheme for the Airport. This scheme included the refurbishment of the existing hangars, and the building of new maintenance facilities and a new control tower. Proposals also include the creation of a "College of Aviation Engineering and Training", with additional flight-training facilities, offices and a hotel.

"Douglas Mancini has been a very impressive campaigner, ensuring that we don't have a new town built over Fairoaks Airport, and he has presented a compelling alternative vision for the site.

It ensures that the debate about the future of this site is properly informed, and that there is a realistic alternative to over-development - an alternative that can create jobs, preserve the environment, and also make sure that this really valuable airport site is there for the future."

Michael wrote to Surrey Heath Borough Council on 28 January 2019, and again on 25 September, to express his wish for the character of the area to be preserved, and for the Airport to continue in its current form.

On 10 February 2020, the Planning Application was withdrawn by the applicant.