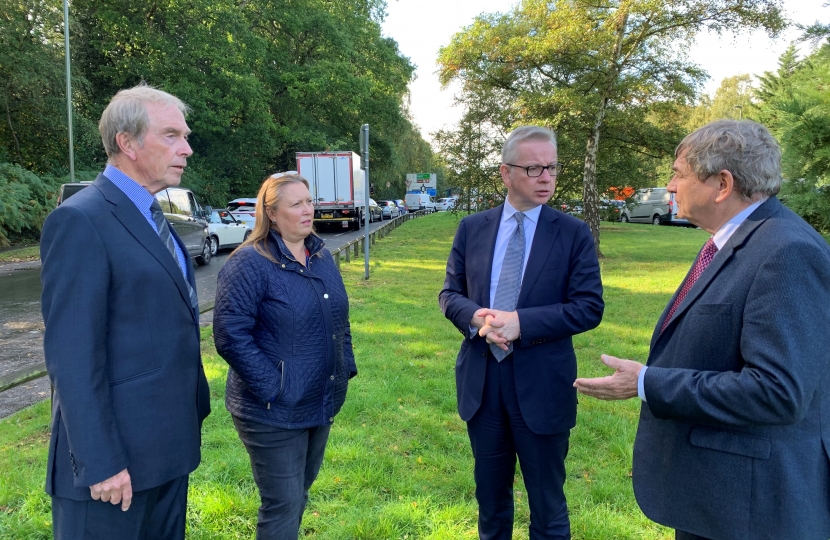 Congestion at the junction with the M3

Michael frequently receives complaints about the A322 Lightwater bypass, and it is recognised as the most significant cause of traffic congestion in Surrey Heath. He has been working with Surrey County Council and the Department for Transport to seek the necessary investment, and has pressed Highways England for action.

Highways England agreed to head a detailed study into possible solutions, and below is a timeline of the recent action Michael has been taking:

February 2020 – Michael wrote to the Chief Executive of Highways England, Jim O’Sullivan, to ask for news concerning the study into possible solutions to ease the traffic issues at the junction of the A322 and the M3. Nick Harris, Highways England’s Operations Executive Director, provided a response and a copy of his letter of 13 March is attached below.

May 2020 – Michael wrote to Nick Harris to ask for an update, and a copy of his response of 8 June is attached below

September 2020 - Michael wrote again to Nick Harris to ask for a further update, and a copy of his response of 16 September is attached below

May 2021 - Michael held a further meeting with representatives from Highways England and Surrey County Council to discuss the congestion problems at the junction and how they could be addressed. He posted an update on his Facebook page which you can read here.

June 2021 – Michael met local County Councillors Richard Tear and Rebecca Jennings-Evans to discuss the issue of congestion at the M3/A322 junction, as well as wider problems surrounding noise and air pollution along the M3. They committed to working together to press Highways England, the County Council, the Environment Agency and Defra for the necessary improvements.

July 2021 – Michael sent joint letters with Cllr Tear and Cllr Jennings-Evans to Highways England and Surrey County Council, which are attached below.

September 2021 – Michael, together with Cllr Tear and Cllr Jennings-Evans, continued to press for improvements to deal with traffic congestion and pollution on the A322 and M3. They were in regular touch with Matt Furniss, Cabinet Member for Transport and Infrastructure at Surrey County Council, and you can read Cllr Furniss’ response here.

January 2022 – Michael held another virtual meeting with a number of representatives from National Highways (formerly Highways England) to discuss what progress had been made regarding long and short-term options for reducing congestion at the M3/A322 junction, as well as what action is being taken to reduce noise and air pollution. He posted an update on his Facebook page, which you can read here. He received the below response and summary of the meeting from National Highways in late January.

February 2022 – To follow-up on the below summary, Michael wrote again to National Highways to reaffirm their commitment to a public meeting with residents and to ask to be updated upon the completion of the Validation Exercise detailed in the January letter. Michael also asked for any further advice and assistance regarding what alternative measures might be available to help mitigate noise and air pollution.

March 2022 – Michael then received the below reply from National Highways suggesting he approaches Defra regarding its Noise Mapping Process.

April 2022 – Michael wrote to Defra to raise residents’ considerable ongoing concerns relating to noise and air pollution emanating from the junction. He explained the importance of finding a feasible solution, especially in light of the previous proposed solutions which have been pursued to little avail, including resurfacing the motorway and planting trees along the noise hotspots. Whilst Defra’s Noise Mapping process is undertaken every five years, with the next exercise scheduled in 2024, Michael asked what mechanisms exist to allow an area to be monitored outside of the usual schedule. He has not yet received a response but will be sure to share any news once received.

June 2022 – Having chased for further news, Michael received the below response from National Highways regarding the completion of its validation exercise. As you will read, the response disappointingly offered limited progress. Consequently, Michael then sought a meeting with the Cabinet Member for Transport at Surrey County Council, Cllr Matt Furniss, so that they could discuss how best to proceed. This meeting took place on 24 June, and it was agreed that they would write again, jointly, to Nicola Bell at National Highways, to offer an update on the continuing deterioration of the situation at the junction and to call once more for further action. Michael will also be raising the issues with colleagues in the Department for Transport and will continue to update affected constituents.

The A322 lay-by in Bagshot near Freemantle Road was causing local residents a great deal of misery, and following Michael’s campaign with local Councillors, the Surrey Heath Local Area Committee responded and agreed to close the lay-by.

Surrey County Council allocated the necessary funds to permanently close the lay-by, and the work was completed in September 2020.